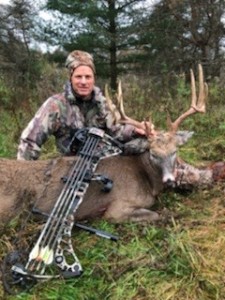 Many people have a negative impression of high fence hunts. I think they are a lot of fun. Do I look at these trophies with same pride as a free-range hunt? No, but it’s still a great time, just a different kind of hunt. Do I still get a rush hunting there? You bet I do. You see a lot bucks and getting a good clean shot at a buck in your size class is not always easy, especially with a bow.

The first night was a tough hunt weather wise, so we hunted from a tent. It was raining off and on and windy; not much was moving. Then right at last light a nice buck came out of the woods 85 yards away. I took a closer look at him with my binoculars. I liked what I saw. I asked my guild what he thought. He said it was right in my 160” size class. I decided if he gives me a great shot, I’ll take it. It took a while, but he finally came broadside at 30 yards. I started to draw when a 190” class buck walked in from behind the blind and stopped right in front of the buck I was trying to shoot. He moved, but then a doe was in my way. I was losing light fast. I finally got my shot and came to a full draw. My guild then whispered, “You are going to hit the tent; stand up a little.” That is not a comfortable position in which to shoot! I took aim, let the arrow go and made a great shot.

The buck took off the way he came. We saw him go down just inside the woods. He then got right back up and took off. With the rain and knowing I hit him well we went after him right away. We found where he went down and picked up a good blood trail from there. I was amazed he went as far as he did. My buck ended up scoring 157.

At most camps once you shoot your animal they expect you to leave, Not at the Legend’s! The ranch director Robert Sergi was fantastic. He insisted we stay for a wine tasting party the next night. Then on Wednesday morning he gave us a tour of his breeding facility. The staff at the Legends were very attentive asking, “Do you need anything? Can I get you something?” If you want a fantastic hunt, a great place to bring your wife along, you should consider the Legend’s Ranch. The food, the people you meet from all over the country, and the staff are great. Plan on being the high bidder at our next fundraiser in March. You won’t be sorry! You can contact the Legends Ranch at; 231-745-8000 or www.legendsranch.com