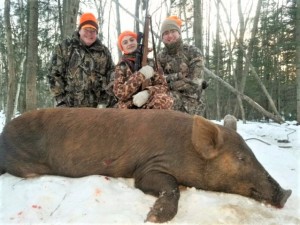 The January temps were low and the wind was high as Alex Hawkins (my grandson age 14) was settling his crosshairs behind the shoulder of the large boar at Bob Easterbrook’s Sr.’s Heritage Trophy Hunts in Lupton Michigan. Bob Sr. donates to our fundraiser every year and had invited us up for a boar hunt a month earlier. By us, I mean my grandsons Colin (age 18) Alex and myself. I hunt a lot with Bob Easterbrook Jr and we have been the best of friends for years. Bob Jr. brought up his family and a long-time friend Helen for her first time ever hunt. It was going to be an exciting weekend for everyone!

I had bought Alex a Ruger lever action .44 Mag carbine a few years before and this was his first chance to bring home some wild game for the family. His older brother Colin had taken his first deer on the youth hunt the previous season and he came along to see what boar hunting was all about. We arrived Friday evening and planned to start early the next morning.

We arose at first light, had a hearty breakfast and headed out to the range to check the firearms to make sure they were still sighted in and to give the hunters a confidence boost. The temperature was in the teens and the winds were gusting 10-20 mph. It was cold. All of the firearms hit their targets. So, off we went, walking the snow packed trails looking for the pigs. Alex was with Bob Jr., when they spotted a nice boar. They were able to shorten the distance between them to about 25 yards. Then Alex took aim and pushed his safety forward. The Ruger roared, the boar squealed and ran about 10 yards, Alex had made a perfect broadside shot right behind the shoulder and we were all smiles! We loaded the boar behind the ATV and took it to the weighing and field dressing area. The boar weighed 200# and Alex could not have been happier and his Papa was beaming with pride. We dropped the boar off at a local processor to be picked up the next weekend.

Since it was late, Bob Sr. asked us to spend the night, we relished a great meal while the boys shot the air archery targets and enjoyed Bob Sr.’s “Memory Room” where all of his African trophies were displayed. Life does not get any better, family, good friends and a successful hunt! After we left Sunday morning, Bob Jr. and Colleen guided Helen to her first ever successful boar hunt. Congratulations Helen, nice job!